For the purpose of writing a research proposal, I’ve recently found myself wondering exactly what kind of art it is that I like. Or more, what area within Art and Textiles really grabs my interest? I found I could narrow my interest down to the following vague sounding statement (haha, it needs some honing)

The appearance of “foreign elements” in Japanese art & design.

I already gave some examples of this in a previous post, where exotic birds appear in Japanese paintings and textiles. 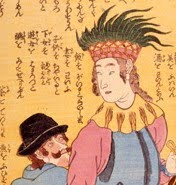 Yokohama-e simply means images of Yokohama. These are Ukiyo-e prints (woodblock prints in multiple colours) which were created in a very small and particular window of Japanese history. During the 1860’s, after Japan had been “opened” to the outside world by American Commodore Matthew Perry and his fleet of “Black Ships”, Japan signed a series of trade agreements with 5 major nations. (France, Russia, Great Britain, Holland and the United States) These agreements allowed merchants from those countries to establish shopfronts and quarters in the port area of Yokohama.

What resulted was a small and curious population of foreigners residing in Japan. Ukiyo-e artists like Sadahide Utagawa (1807-1873) made these incredible prints which depicted these strange foreigners. Primarily these were intended for Japanese audiences and you can tell from the outrageous fashions and grotesque faces on the subjects that these were often not done from observation but from guesswork and secondary images like foreign newspaper illustrations.

I think they’re great. The way they show foreigners through Japanese eyes, and in such a typically Japanese technique is priceless.

This print above by Sadahide is called People of the Five Nations – The Dutch and is meant to represent a typically dutch couple. Since most foreign merchants in Yokohama were male, its said there were actually very few women in Yokohama during the period the prints were made. Does that account for how….unattractive this dutch lady is?

I believe the text describes the attributes of the Dutch people and the sorts of technologies they were well known for, like the telescope the man is holding.

This print is also by Sadahide from 1860. Its long winded title is Life Drawings of People of Foreign Nations: Picture of Russians raising sheep for Wool. Unfortunately Sadahide has depicted a goat instead…

This final image is Banquet of Five Nations (at the Yokohama Club) by Yoshikazu, from 1861. The little labels tell us which nations these foreigners are supposed to be from. There’s some fantastic head gear in there too, though I dont think it helps us tell the nations apart as Yoshikazu had probably intended…

There are so so many more of these prints. MIT has a great website about Yokohama-E with loads more images and an essay: http://ocw.mit.edu/ans7870/21f/21f.027/yokohama/yb_essay04.html