Yesterday I made a trek out to Shizuoka from Kyoto on the bullet train to catch the last day of two exhibitions I really wanted to see when I came here to Japan for my 3 week trip.

The first was at the Keisuke Serizawa Art Gallery, which was showing 「芹沢銈介の名作 ―花ヨリモ花 染メノ花―」. I guess you could translate it as “The Famous works of Serizawa Keisuke – A dyed flower is more real than a flower” (which is apparently a quote of his).

Anyway, it was fantastic. Serizawa’s Katazome work is very well known in Japan and this probably has alot to do with the way he made his art accessible, like the katazome dyed calendars he produced yearly. 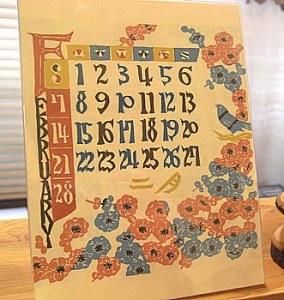 He was influenced by Okinawan “Bingata” dyeing (similar technique wise to katazome) and he formed part of the Mingei movement – a craft movement in Japan that proposed art for the masses.

I loved his colours and his sense of design was really interesting. Some of my favourite pieces in the exhibition : 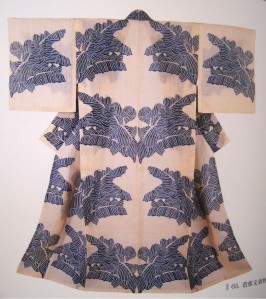 this is a linen kimono from 1961
Its such a simple motif but the way he has repeated it makes it very bold. 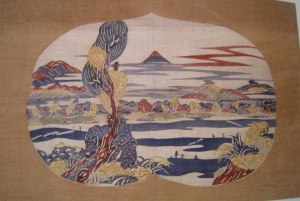 This is an early work from the 1930’s depicting the area around Shizuoka (?) with Mt Fuji in the background.
This is the website of the gallery : http://www.seribi.jp/