Skip to content
Date: July 28, 2010Author: melindaheal 0 Comments
I found this image today, its a woodblock print of a parrot by 嵩岳堂 which I think is read as Sūgakudō from 1859.

Don’t know about you but I wouldn’t say its a very pretty rendition of a crimson rosella or whatever its meant to be. But you know, it is interesting because it shows how artists are sometimes so clueless when it comes to depicting things that are foreign to them.

Take for example the “gum trees” in Australian landscapes painted by early colonial English artists who came out to Australia. It’s not their fault but they really had no idea: 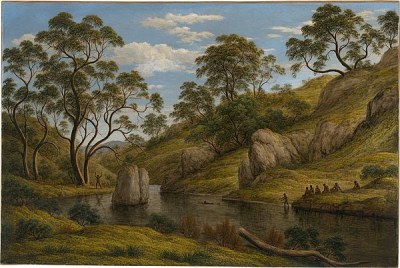 http://artsearch.nga.gov.au/Detail-LRG.cfm?View=LRG&IRN=180222
Poor John, he just couldn’t shake the english trees from his mind.

I wonder whether Sūgakudō had a real bird to draw from or if he took it second hand from somewhere else. In which case it might be fair enough its sooooo ugly? The face only a mother could love….