Skip to content
Date: September 28, 2016Author: melindaheal 0 Comments
It took me many months to read, but I successfully worked my way through a book by Japanese artist and researcher Fukumoto Shigeki called “Somé no Bunka“, or “The Culture of Dyeing”.

Part of the motivation behind my exhibition (and especially the choice of title) last month at the Japan Foundation in Sydney was to introduce more people to the genre of somé. Somé means ‘dyeing’ in Japanese and the term separates it from other forms of textiles.

In Japanese it is common practice to divide the field of textiles into dyeing and weaving (somé & ori 染め、織り). The name of the textiles course in many Japanese universities is senshoku (dyeing and weaving 染織) which is the just a different reading of the characters for somé+ori.

Somé is different from weaving, obviously, but it is also distinct from surface design or ‘textiles’. It’s a complicated division and of course there are overlaps but Fukumoto’s book reiterates the unique history and way of thinking behind Somé.

Fukumoto is a practitioner and proponent of Textile dyeing. His own work is diverse but is characterised by free-form dyeing with gradations, folds and wax resist. 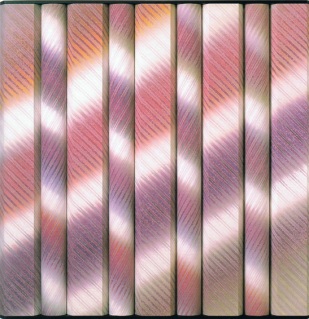 This is a beautiful video showing him and one of his techniques. I have to say it’s a little bit contradictory to the things he says about flatness and tactility but it’s interesting nonetheless.

I thought I might translate a few short passages from Somé no Bunka here for you. (Please excuse the Engrish-y feel of them!)
Preface
“There is a curious pleasure to be found in dyeing work, almost without realising. It’s something you sense during the actual work of the dyeing process; a joy perhaps only privy to those who’ve tried it.

There’s the feeling of pleasure when impurities and excess dyes are washed away. Or in the final rinse, one feels a sense of accomplishment as the dye stops running from the fabric and the water runs clear.

You see the vibrancy of the dyed colours in the soaking fabric.
Relaxing the fabric with steam, it becomes supple and fresh again.
Touching the freshly dyed fabric, and knowing it is clean and clear of impurities is a joyous moment.
As well as the many possible dye-effects, there is a satisfaction in knowing the finished artwork is still simply a single piece of cloth.
There is a joy not simply the making of the work, but also in the sensation of touching it with the skin.
I question that perhaps I enjoy this too much.”

“Dyeing requires cloth and dye.
Unlike painting with pigments, for example, dyeing is borne of the need to fix colour onto cloth without spoiling the fabric’s characteristics.
That is, the basis of dyeing is using methods that don’t alter the feel of the cloth.

If you go and frame or mount a dyed piece of fabric, it becomes a flat artwork. That piece of cloth is transformed into a mere surface and it loses its meaning as a soft, pliable cloth.
If it’s an illusory flat surface you want, what’s wrong with using canvas, or paper, wooden board or a wall?
If you insist on using fabric even though the final product will be hard and flat, what’s the point of going to all that trouble dyeing it to maintain it’s fabric qualities? You’re probably not interested in the tactility of the cloth – the direct interaction with the skin.
In which case, your choice to insist on using fabric is nonsense.”

He also goes into a lot of depth regarding the relationship between Japan’s dyeing history and culture and European and American understandings of dyeing. He is particularly scrupulous about the Surface Design Association in the U.S and their development from a weaving-dominated association to one that covers all kinds of textiles. I think Australia went through a very similar progression, from crafts-based textile skills, to 1960’s/1970’s free-form fibre-work and dyeing to a contemporary Textile scene we see today.

Though Dyeing tends to be subsumed under the heading of Surface Design in Australia and the U.S, Fukumoto maintains that Somé and Surface Design are not one and the same. He advocates using the word Somé as an alternative, to avoid the inevitable connotations of words like Textile Design, Surface Design or Fibre Art.

He’s actually quite adamant, “Sashimi, Karate, Anime and Shibori are already incorporated into our internationalising vocabulary. Why not just call it Somé? Japanese dyeing culture is highly regarded around the world. If people are so enthusiastic about learning those traditions and skills, first they should just use the word Somé!!”

I would love to share more of his writing in future posts – but for now just these tasters!

— keep an eye out, I hope to post images from my exhibition in the near future!